The annual Murray to Moyne bicycle relay was held in near perfect conditions this year in April, where a group of Bordertown cycling enthusiasts rode from Mildura (the Murray River) to Port Fairy (the Moyne River) to raise money for the Bordertown Hospital.

Its’ a distance of 520 km over 24 hours. This year the Bordertown team was a contingent of 12 riders made up of 3 teams of 4, each team riding about one third of the distance in 30km relay legs.

This year marked the 20th Murray to Moyne and the Bordertown group raised a record $37,000 for the event. Nearly 1200 riders participated from across Victoria and SA, all raising money for their local country hospitals. 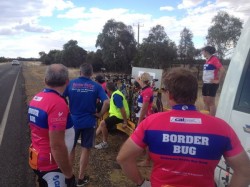 Riders began at either Mildura, Swan Hill or Echuca on Saturday morning and all converged on Hamilton by Saturday night. Sunday morning saw all participants ride 95km from Hamilton to Port Fairy together to complete the ride.

The weather was fine and riders were helped by calm northerly winds which helped many groups achieve some record times.

A great time was had by all riders and many thanks go to support volunteers who worked to make the event a success. I would like to personally thank the following people for their generous support: